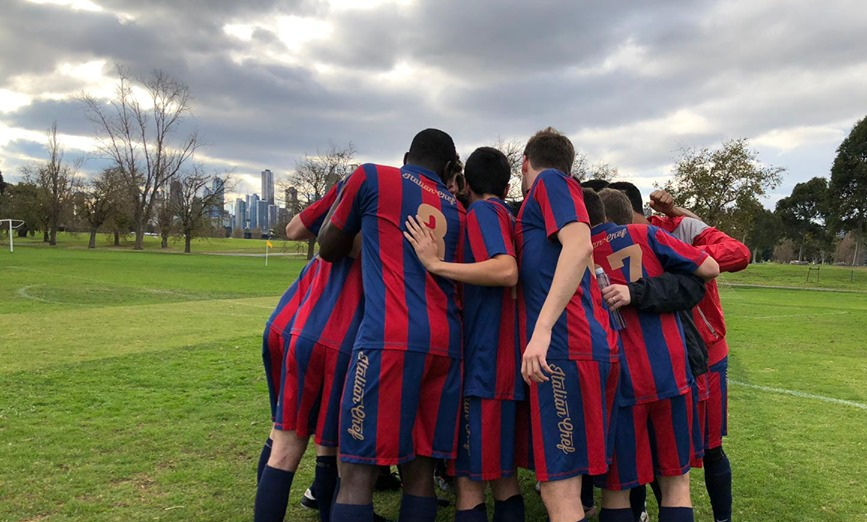 Firsts – Catch up Round

Man of the Match: Andy Reid

Coach Comments: Complete class again from the boys. We toyed with them at times and our pace was just too much for them. We went 3 up shortly after half time and then even though we conceded 2, we were far too good for them.  Even though Mike was sledged when taking a penalty, he clinically despatched to make the win comfortable.
Bubba played whilst sick for the 2nd week running and scored again. Effort for the club appreciated. Beer owed!  Yes… Bubba… drink owed. Classy performance and another 3 points

Reserves – Catch up Round

Man of the Match: Abdi Yusuf

Coach Comments: Playing and unbeaten team away was not going to be easy. But from minute one right through to the final whistle our lads gave it everything. Some fantastic play from both wingers in the first half, Paul and Mouse continued to cut them open. 1-0 at the break after a tidy finish from Mouse. The second half started a little bit shaky with Mount Waverley coming out fired up. A great goal on the counter with Andy Britten clipping a ball through to Paul who lobbed the keeper brilliantly. Constant pressure from the second goal to the end saw Aaron and Lukas round off what was a great day for the Parkers Ressies. 6 wins in the last 7, we are clicking as a team at the right time. Special shout to Abdi who was absolutely everywhere for 90 minutes. Man of the match: Steve Ooi

Coach Comments: Up against a young and well drilled side, we held our own after conceding a couple of early goals. A penalty from Dean narrowed the gap but in the end we ended up going down 4-1. Great signs from a team who have never played together before and are in their first season. Man of the Match: Spencer O’Riordan

Coach Comments: Against a top 2 team who are a year older and have been together several years, we did well until the later stages. Work to be done on defending and fun.

***If you are wondering where the other reports are, your coach hasn’t completed it***